Microsoft like any cloud provider wants as much of your data, and as many of your services and servers as possible running in their cloud services. Having said that even a small business can have serious amounts of data, and getting that data up into your cloud of choice isn’t so easy or quick. Amazon for a while now (since 2009) have had their AWS Snowball Service and Google have recently gotten into the game with their imaginatively named ‘Cloud Data Transfer’ service (I prefer Snowball).

If you’re an Azure customer until now you’ve been stuck with their ‘Azure import/export service’ well things have moved on, and you’ll be pleased to know Microsoft have just announced into public preview their ‘Azure Data Box Disk’ service – their own secure service that will allow you to move terabytes to petabytes of data up into Azure cloud using high speed, secure transfer appliances. Microsoft will ship you a proprietary, secure, and tamper-resistant device and will even handle all of the end-to-end logistics on your behalf. Each disk can handle up to 35 TB of data (if you have more than this you can use Microsoft’s Data Box service instead allowing up to 100 TB capacity). 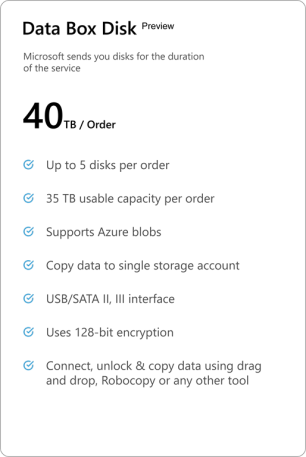 If you have a large amount of data to move now (and you’re in the US or any EU country) would be a great time to start, during the preview Microsoft have offering the Data Box Disks for no charge including free shipping! You will obviously pay for the data storage once in Azure. If you’re not in the US or EU then the service will be expanded following the preview.